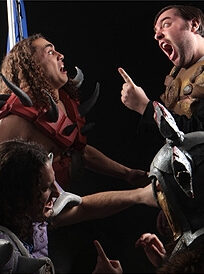 So it’s only fair for metal band Powerglove to appropriate something from video games.

“Everyone in the band kind of had this idea independently,” Marchiel said from Virginia, where Powerglove was in the process of wrapping up its first national tour in advance of Friday’s homecoming show at the Middle East, Cambridge. “We were all in a local melodic death metal band called Revengence when Powerglove started out as a side project. It very quickly eclipsed our real band.”

Rock bands have been covering video game music for years. The most popular compositions have been performed by groups as varied as Wisconsin a cappella singers Redefined and classical orchestras including the London and Tokyo philharmonics. Even video game composer Nobuo Uematsu formed his own rock band, the Black Mages, to play his music live.

But Powerglove adds something different.

“Most video game themes are looped after a minute or a minute-and-a-half,” Marchiel said. “They can’t really be rock songs on their own. What we do is transcribe the music and then arrange it and add to it. We have to flesh it out, find where a chorus might go and turn it into a real song.”

The band also does long, complicated suites including an eight-minute medley embellishing their favorite bits of “Final Fantasy IV” called “Red Wings Over Baron.” It’s what you’d expect from a guy who spent his childhood listening to Metallica and Megadeth and playing “Final Fantasy” (and a little “Duck Hunt”).

“I remember pausing Final Fantasy III just to listen to the music over and over,” Marchiel said.

For a band dependent on old-school Nintendo themes, Marchiel doesn’t lament the decline of video game music in current games, which favor soundtracks populated by the likes Rush, R.E.M. and Aerosmith.

“There are so many games of that (Nintendo) era that we could try for the rest of our lives and never go through all the themes,” Marchiel said.

Which is basically the plan.

“We look at this as having a future,” Marchiel said. “We’re finishing a three-month tour, so this has become our career. Now we want to see how far it’s going to go.”

Powerglove, with Psychostick, Look What I Did and Peelander-Z, at the Middle East, Cambridge, Friday. Tickets: $12; 617-864-EAST.