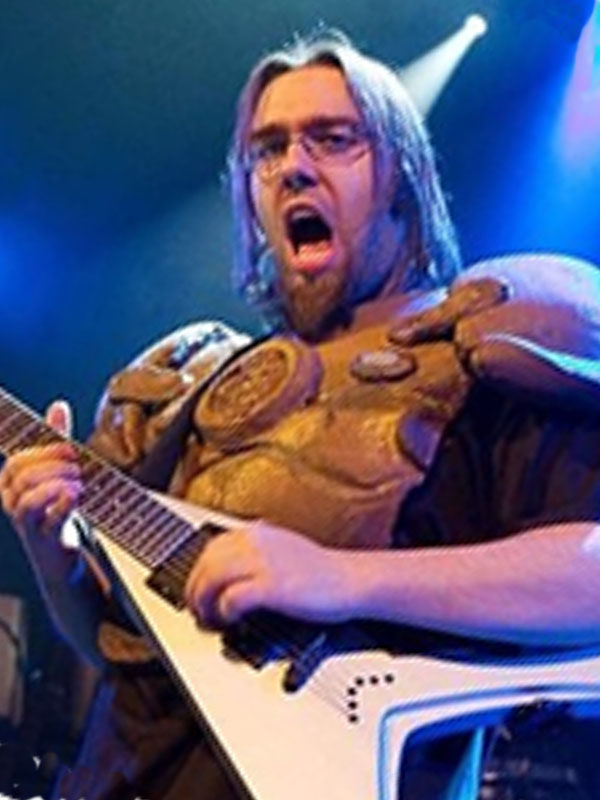 After ten years in Powerglove, guitarist Chris Marchiel has decided to part ways with the band.

“After ten years of quests, side quests, cut scenes, loyalty missions and a ton of grinding, I have decided to leave the party,”” says Chris. “”I spent the best months of that time travelling with my three best friends, playing music for thousands of new best friends in places I never thought I’d get to see. If anyone ever asks you to spend your 20s in a video game metal remix band, you should do it without question.

During that time, I was also an aspiring video game designer and programmer, learning all I could and searching for a project that gave me that incredible hopeful feeling that I got when starting the Powerglove adventure. Two years ago I found that project and started working on it full time. That game is finally getting announced and going live this year and I simply can’t do both projects at once anymore.

Powerglove was a huge part of my life and always will be, and in the world of music it’s basically a miracle to spend a decade in a band and truly part as friends. Somehow it worked out that way for us, so I can wish Alex, Bassil and Nick more of all the metal glory that we used to dream about as kids.

Lastly, if you read this and thought back to a show, or a convention, or to a time listening to us in a car, or on a computer, or had any memory of us that made you smile, thank you. Just, thank you. Whenever I was down or having a hard time, I thought of you. I spent these years celebrating and paying tribute to what I thought of as the golden age of video games, and a time in my youth that I sometimes wished I could relive. Now I know that my time with Powerglove and our ridiculous, improbable journey together are what will give me that nostalgic, wistful smile for the rest of my life.”

“While we are all sad to see Chris go, we are very proud to have held strong together for as long as we have. Chris is and always will be one of our closest friends, and his departure from the band won’t sully any of the crazy fucking memories we’ve had together. (Side note – his game is fucking awesome). We are very excited to finish recording our new record, where Chris’ sound will still be heard, through his writing, and even his playing on a few clown-rapingly shredtastic video game tracks. With Chris’ departure, we have had to forge ahead in our ongoing quest to fuck with your childhoods, enlisting the help of a new traveler. Joining us on our ship of ruined dreams as our live guitar player, is our ex-accountant / Bob Katsionis (Firewind) impersonator: Ben Cohen. If this epic comparison of Ben and Bob doesn’t have you going crazy, this video of Ben Cohen shredding ‘So Sexy Robotnik’ shurley will!”