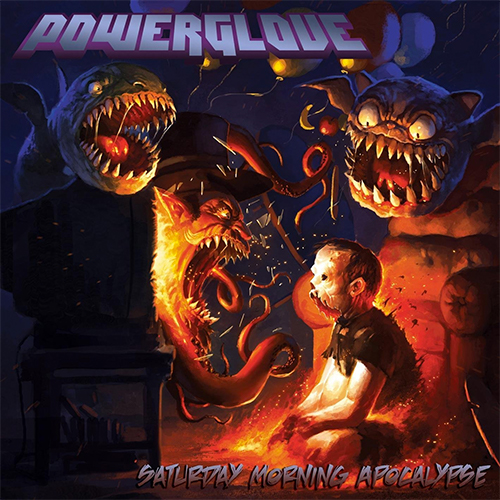 The song “Transformers” from video game metal masters POWERGLOVE is available for streaming in the YouTube clip below. The track comes off the band’s new album, “Saturday Morning Apocalypse”, which is being released to day (Tuesday, September 28) via eOne Music.

This is POWERGLOVE’s first record with eOne Music and the band is taking its songs in a new direction.

These new tracks are based off the nostalgia of Saturday morning cartoons and movies that anyone who’s grown up in the ’80s will immediately recognize.

Silver adds, “No matter what we write, we know all the comments will be about how bizarre we look, how ridiculous this track list is, and the fact that we somehow got Tony Kakko [SONATA ARTICA] to sing the Pokemon theme for us. We would tell you how clown-rapingly awesome it is, but you can decide that for yourself when the album comes out in September.”

POWERGLOVE is composed of four battle-hardened rockers out of Boston: Alex Berkson, Bassil Silver-Hajo, Chris Marchiel, and Nick Avila. This band shreds metal renditions of everything from old-school 8-bit video game classics to contemporary blockbusters, all with a heavy metal attitude.